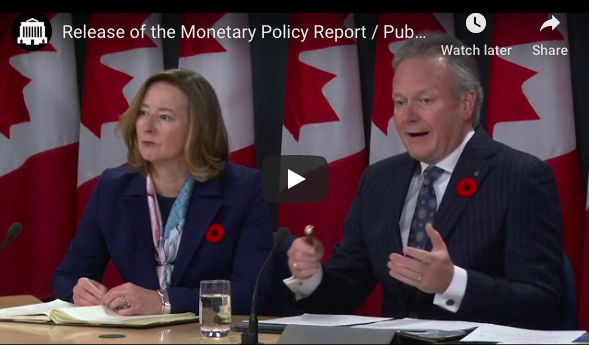 Bank of Canada holds its key interest rate at 1.75 per cent

Here’s the Bank of Canada’s official statement for its interest rate decision on Wednesday, October 30, 2019:

The Bank of Canada today maintained its target for the overnight rate at 1.75 per cent. The Bank Rate is correspondingly 2 per cent and the deposit rate is 1.5 per cent.

The outlook for the global economy has weakened further since the Bank’s July Monetary Policy Report (MPR). Ongoing trade conflicts and uncertainty are restraining business investment, trade, and global growth. A growing number of countries have responded with monetary and other policy measures to support their economies. Still, global growth is expected to slow to around 3 per cent this year before edging up over the next two years. Canada has not been immune to these developments. Commodity prices have fallen amid concerns about global demand. Despite this, the Canada-US exchange rate is still near its July level, and the Canadian dollar has strengthened against other currencies.

Growth in Canada is expected to slow in the second half of this year to a rate below its potential. This reflects the uncertainty associated with trade conflicts, continuing adjustment in the energy sector, and the unwinding of temporary factors that boosted growth in the second quarter. Business investment and exports are likely to contract before expanding again in 2020 and 2021. At the same time, government spending and lower borrowing rates are supporting domestic demand, and activity in the services sector remains robust. Employment is showing continuing strength and wage growth is picking up, although with some variation among regions. Consumer spending has been choppy, but will be supported by solid income growth. Meanwhile, housing activity is picking up in most markets. The Bank continues to monitor the evolution of financial vulnerabilities in light of lower mortgage rates and past changes to housing market policies.

The Bank projects real GDP will grow by 1.5 per cent this year, 1.7 per cent in 2020 and 1.8 per cent in 2021. This implies that the current modest output gap will narrow over the projection horizon. Measures of inflation are all around 2 percent. CPI inflation likely will dip temporarily in 2020 as the effect of a previous spike in energy prices fades. Overall, the Bank expects inflation to track close to the 2 per cent target over the projection horizon.

All things considered, Governing Council judges it appropriate to maintain the current level of the overnight rate target. Governing Council is mindful that the resilience of Canada’s economy will be increasingly tested as trade conflicts and uncertainty persist. In considering the appropriate path for monetary policy, the Bank will be monitoring the extent to which the global slowdown spreads beyond manufacturing and investment. In this context, it will pay close attention to the sources of resilience in the Canadian economy — notably consumer spending and housing activity – as well as to fiscal policy developments.