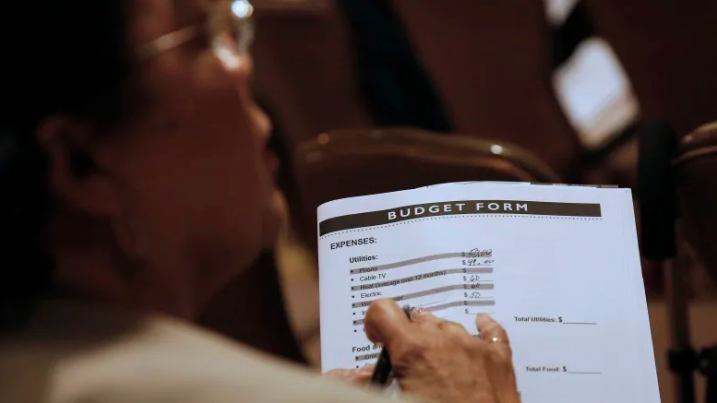 What’s bad news for some is good news for others, and Canadian mortgage-holders are the unexpected beneficiaries of some of the gloom that’s hovering over Canada’s economy.

Fixed mortgage rates have been falling precipitously in recent weeks, as the cost of financing those loans has gotten cheaper. Banks and other lenders get the money that they loan out in mortgages by borrowing it themselves on the bond market, and the yields on five-year bonds have been falling since late 2018.

A five-year Government of Canada bond was yielding just 1.45 per cent on Monday. That’s the first time the figure has been below 1.5 per cent since the summer of 2017.

Last week, the yield curve on long-term lending versus short-term inverted, a rare event that has an uncanny knack for predicting recessions. (For a longer explanation on what an inverted yield curve means, read this.) 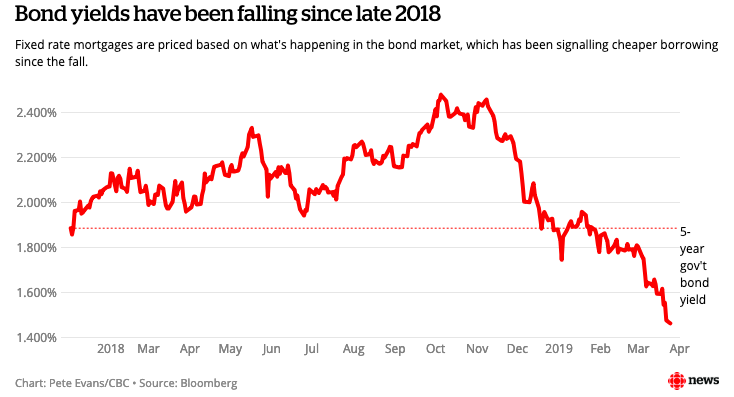 “There’s all kinds of technical forces, and it is not necessarily the case that tomorrow we’ll have a recession,” CIBC economist Benjamin Tal said in an interview.

“However, the yield curve slowing down is a clear signal … we have to listen to. We have a conflict between the stock market, which is more optimistic, and the bond market which is more pessimistic.”

Put simply, bond yields are heading lower largely because investors think the prospects for the economy are looking dim, so they expect interest rates to start moving lower.

That’s because cheaper financing costs are allowing the banks to cut their mortgage rates to try to entice borrowers. CBC News reported in January that Royal Bank cut its five-year posted rate to 3.74 per cent, a move that rivals were expected to match.

About three quarters of Canadian homeowners opt for the security of a fixed rate loans, Tal says, but the trend toward lower rates is happening in variable rate loans, too — albeit for different reasons.

Unlike fixed rate mortgages which take their cues from the bond market, variable rate mortgages tend to move in conjunction with whatever the Bank of Canada is doing.

And investors are betting that the central bank will soon be moving its rate down, not up. Investors in financial instruments known as overnight index swaps are pricing in zero chance of a hike this year, but about a one-in-five chance of a cut by July, and up to a 44 per cent chance by September.

White says the variable-rate mortgage market is simply pricing in some of the negative economic indicators of late, including lower inflation and an anemic GDP number that showed Canada’s economy actually shrank to close out 2018.

“There’s an increased probability they will actually cut to try to fuel economic growth,” White said, of her expectations for Canada’s central bank.

And economists are predicting the same thing.

“One of the biggest shifts that occurred in our quarterly March forecast was the removal of any further interest rate hikes from our outlook,” TD Bank’s chief economist Beata Caranci said in a note on Monday. “We hit the stop button.”

Variable rates have not just stopped going up, they’ve shifted into reverse and gone down in some cases. Rates below three per cent are now common, both at the big banks and at alternative lenders.

The spring is always a key time in the mortgage markets. That’s because the lion’s share of home purchases happen in those months, so lenders try to compete as much as possible on rates to take as big a bite as they can of that business.

Given that, the sudden trend towards cheaper lending could well stick around for a bit, White says.

“Are we still going to be headed for interest rate increases in the next couple of years? Yes,” she says. “[But] for the rest of 2019 the prediction is that the variable rate is going to be stable and maybe has a chance of coming down.”