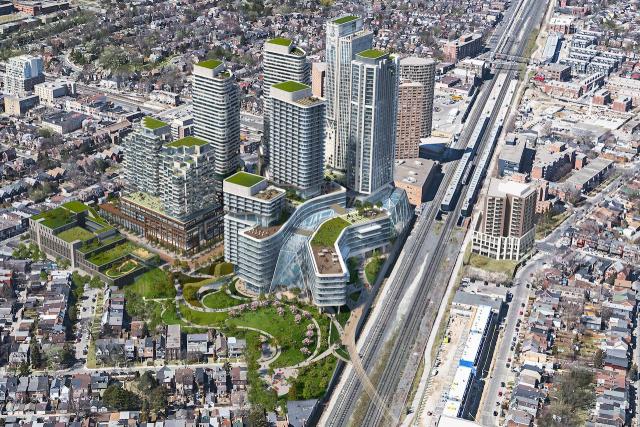 Choice Properties REIT, owners of the plaza at 2280 Dundas Street West, have released concept renderings, a site plan, and preliminary numbers for a proposed redevelopment of the site and of the adjacent high school site across from Dundas West subway station and Bloor GO and UPX station in Toronto’s West End.

First introduced to the community at a meeting in June 2017 where locals were given the opportunity to spell out their ideas for the land, Choice REIT engaged Urban Strategies, Giannone Petricone Associates, and Public Work to create a concept plan or the plaza’s redevelopment. Something that was made clear at that first meeting was a desire held by many that the adjacent Toronto Catholic District School Board’s (TCDSB’s) Bishop Marrocco-Thomas Merton High School at the corner of Bloor and Dundas be incorporated into the plan. An initial concept was debuted at a second public meeting in October 2017, and feedback was gathered at it. As well, a storefront gallery has been in operation ever since at the site, with about 1,700 walk-ins over the last several months, where Choice has been happy to answer questions and take more feedback.

Now, having added Hariri Pontarini Architects to the team, and formal discussions with the TCDSB and the Toronto District School Board (which leases the school to the TCDSB) to build a new school in the southwest corner of the site, Choice has returned with a reworked and more fleshed-out concept plan that all be the basis of a soon-to-be-submitted application to the City of Toronto for an Official Plan Amendment.

The reworked proposal adds one new north-south road to the site, and two east-west roads, while bringing a pedestrian mews southeast from the corner of Bloor and Dundas into the heart of the site. Nine residential towers are proposed with about 2,600 units planned, in around a 50-50 mix of Choice-managed rental suites and condos built with development partners. (The final ratio of rentals to condos is still to be worked out, as is the percentages of 1, 2, and 3 bedroom suites.) Affordable rentals are also to be part of the mix, but again, the numbers are still to come.