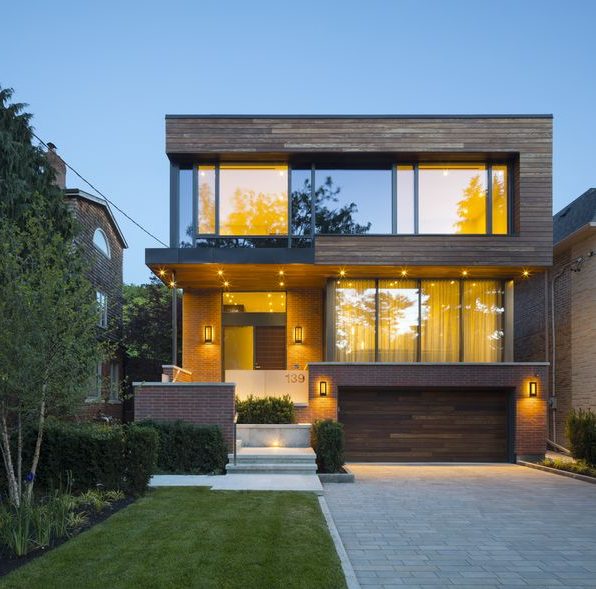 “It never came to blows but it came close,” says architect Jillian Amis, her tongue mostly in cheek. “There were times when I really disagreed about certain things and Michelle was the tie-breaker.”

The laughter bouncing off of the rich walnut walls of Michelle and Steve Steinowicz’s living room proves no one is actually offended.

Still, builder Casey Brooke offers his take: “Sometimes [conversations] were heated but we were all truthful with each other,” he says, setting his wine glass down onto the square glass table. “We were working with clients that understood what they were talking about; a lot of the time you’re dealing with people who don’t … I understand, it’s your dream home, you want to do it this way, but these are the reasons it’s not the right way to do it.”

The home is a dream indeed, but it was never pie-in-the-sky; it was thought out and meticulously planned from the get-go, because Mr. Steinowicz, currently a builder of hotels and condos, was once an architect himself.

“I wanted to do a reality show called ‘My Two Architects,’ ” quips Ms. Steinowicz, a vice-president at a consulting firm.

Even before the couple knocked on the door of a stranger’s house in Lawrence Park and asked the nice couple inside if an architect had been involved (it was Ms. Amis, and she’d done the interiors too), Mr. Steinowicz had been sketching designs for the lot they’d purchased in Sherwood Park, where they’d lived for decades. An architect at firms such as E. I. Richmond and Page and Steele, not only did the Modernist lines flow freely from his pencil, he’d “been bugging” his wife of 30 years with “I wanna build a house.”

The final result of their collaboration is stunning, even from the sidewalk. While it wasn’t dug out of the Don Valley, the red brick façade roots this as a Toronto home, and is a refreshing change from the ubiquitous Opera-House-black-brick homes the city has seen over the past decade. Stepping into the foyer of the 3,500 square foot home is also a treat because the entire plan doesn’t reveal itself right away: the couple’s office, to the right, is a few steps up (Mr. Steinowicz says he had a “three step rule”), and there are only peekaboo views of staircase, living room and backyard greenery.