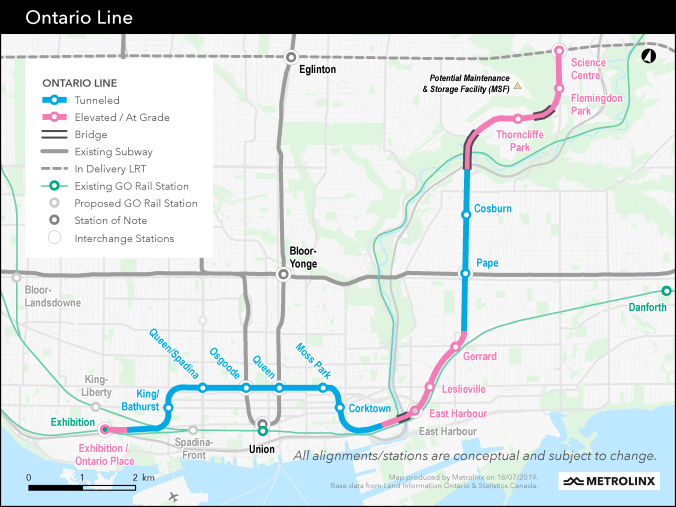 Nearly five years after Mayor John Tory first proposed it, the SmartTrack plan for frequent service along GO Transit rail corridors in Toronto, continues… well… to gain traction, while another transit bottleneck is about to be addressed. Tory and the Chair of the Toronto Transit Commission, Councillor Jaye Robinson, joined the Honourable François-Philippe Champagne, the federal minister of Infrastructure and other federal and provincial officials at the site of the future Finch-Kennedy SmartTrack / GO station today to announce federal, provincial, and municipal government funding for two major transit projects. 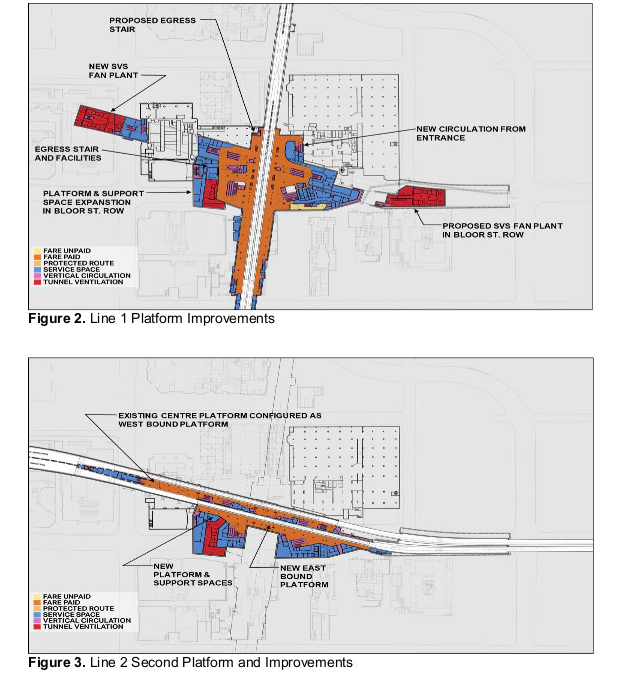 First, the governments are investing in a project to improve capacity at Bloor-Yonge Station, the busiest subway station in the TTC’s network, serving more than 200,000 passengers on an average weekday. According to a Government of Canada news release, “public-transit riders through the station, where Line 1 Yonge–University and Line 2 Bloor–Danforth meet, will benefit from better passenger safety and capacity. Plans include building an extra platform on Line 2’s Yonge Station, modifying the platform on Line 1’s Bloor Station and building a new electrical substation. The Government of Canada is contributing $500,000,000 to project, with the Ontario and Toronto governments each contributing as much as a third of the total project cost. 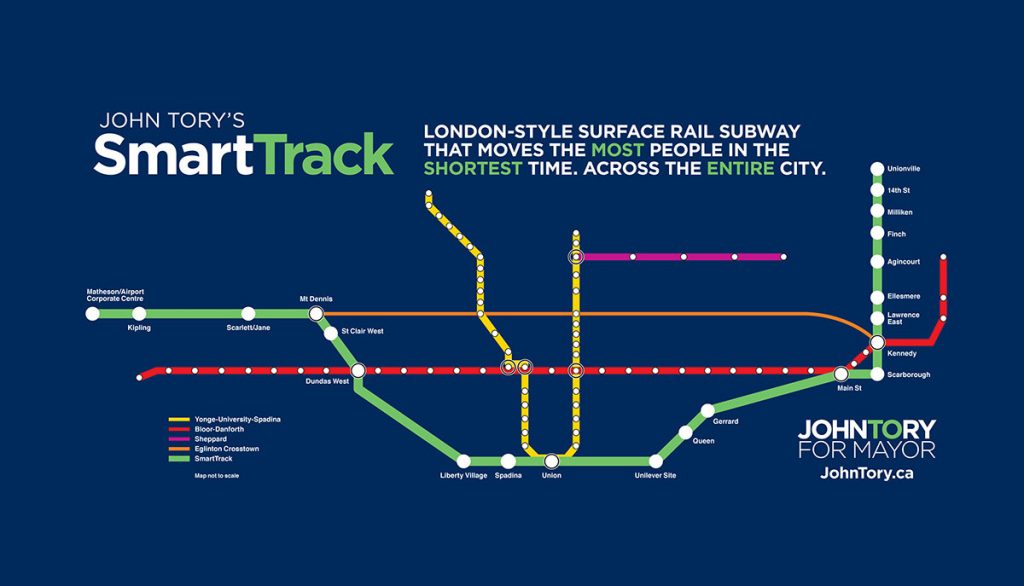 Second, Canada is supplying $585,200,000 to the cost of building the six SmartTrack stations in Toronto along GO’s Stouffville, Lakeshore East, and Kitchener rail corridors. Mayor Tory proposed a version of this plan during his first campaign for mayor in 2014, as a means to deliver frequent rapid transit at low cost to Torontonians. 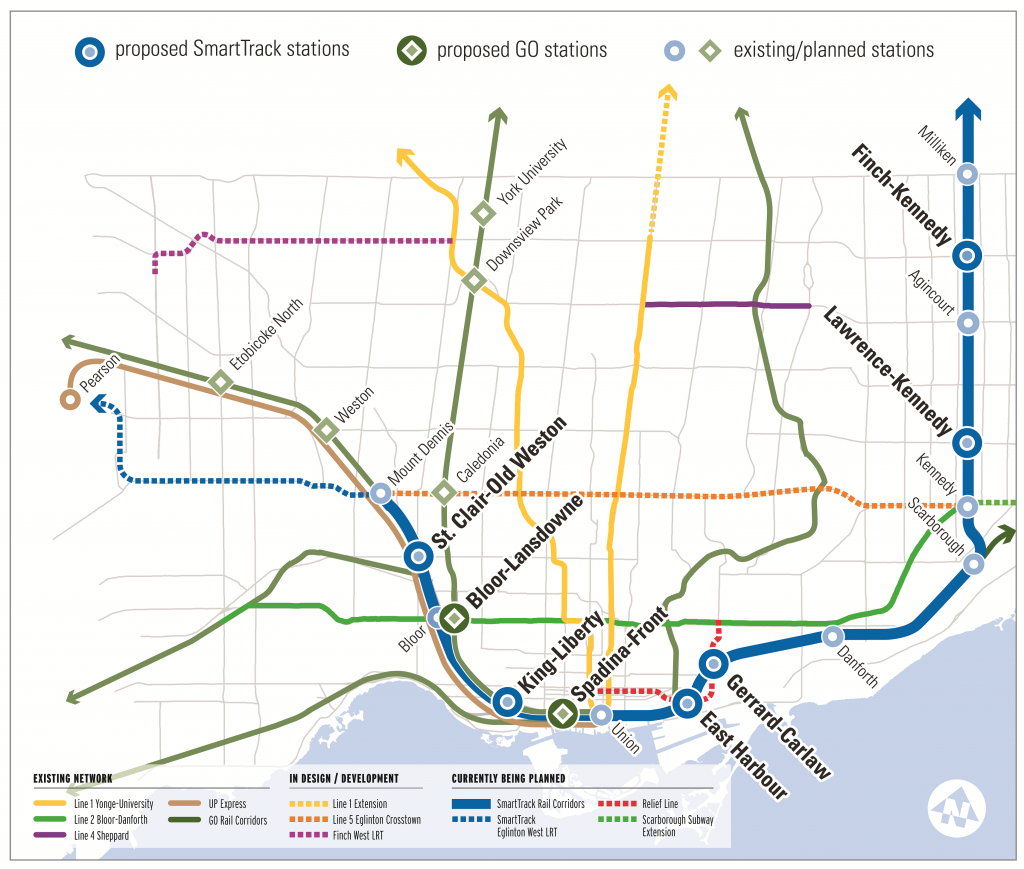 In April 2018, Toronto City Council approved funding toward the SmartTrack stations program, expecting to complete them by 2025. However, in late 2018, Metrolinx announced a new market-driven, transit-oriented development approach for SmartTrack and GO stations. This change paused the City’s process for designing and building the SmartTrack stations, while Metrolinx explored opportunities for third-party development at or near these stations.

Then, last April, the Government of Ontario proposed the new Ontario Line to replace earlier City / TTC plans for a Relief Line subway through downtown Toronto. Late in June, Ontario released a business plan for the line, which, interestingly, did not describe how the new line would connect with one of the original SmartTrack stations at Gerrard Street East and Carlaw Avenue. (The Ontario Line plan also proposed a station at that intersection.) Significantly, today’s announcement includes funding for six SmartTrack stations, which suggests that the Gerrard-Carlaw station is back on the drawing board.

Through the Investing in Canada infrastructure plan, the Government of Canada says, it’s investing as much as $28.7 billion over 12 years in public transit and other projects. In Ontario, the federal infrastructure plan is a component of a $30-billion, 10-year infrastructure program, which the federal, provincial and municipal governments cost-share. Ontario’s share per project is as much as 33.33 per cent or about $10.2 billion. The Ontario government explains that this is part of its 10-year, $144-billion strategic infrastructure capital plan, which includes over $90 billion for public transit and other projects over the next decade.