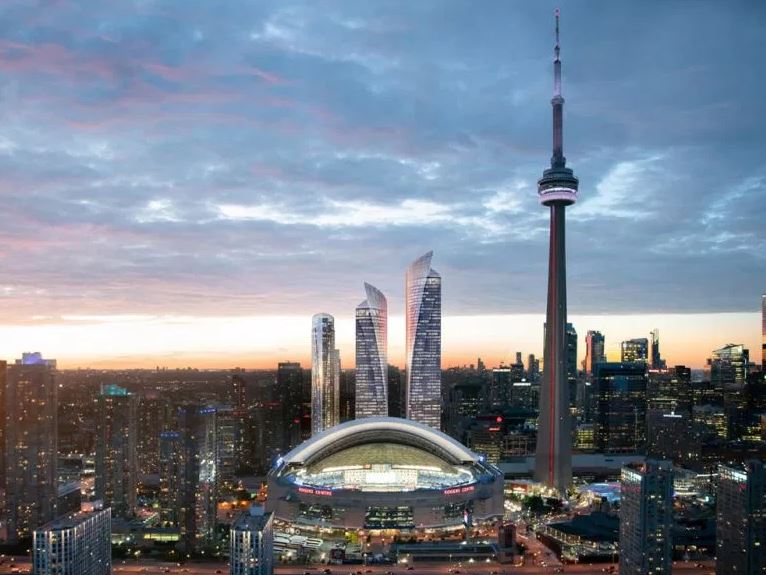 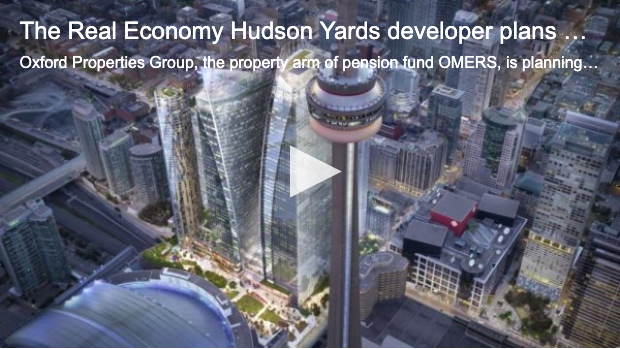 Oxford Properties Group is planning a $3.5 billion (US$2.7 billion) development in downtown Toronto that would be one of Canada’s biggest real estate projects.

The property arm of pension fund OMERS aims to build a 4.3 million-square-foot, mixed-use complex on a 4-acre site that’s just north of Toronto’s Rogers Centre and CN Tower. The development, called Union Park, is the largest ever for Oxford outside of Manhattan’s Hudson Yards, the US$25 billion project it’s co-developing with Related Cos.

Plans call for two office towers, of 58 and 48 stories, about 800 rental apartments across two buildings and 200,000 square feet for retail. Three acres will be devoted to public space, including an urban park over the Union Station rail corridor, which spans Blue Jays Way to the John Street Bridge.

“It’s the culmination of our experience in a number of different cities, and we’ve looked at what we’ve done, whether in Europe or in the U.S. with Hudson Yards,” Eric Plesman, Oxford’s executive vice president of North America, said in an interview. “This is a site that’s exceptionally significant, and it’s rare that you can find this size of site with proximity to the core.”

The project is a big bet on increasing demand for offices from the city’s booming technology and financial-services industries, and the shift to downtown from the suburbs. The Union Park site lies between the space-crunched financial core, and The Well, a mixed-use development that will be home to Shopify Inc. and hundreds of new residents.

Toronto is in the midst of a construction boom. In addition to Oxford’s project and The Well, which will have three million square-feet of retail, office and residential space, Ivanhoe Cambridge Inc. and Hines are developing CIBC SQUARE. That will comprise two commercial towers spanning 3 million square feet that will house offices for Canadian Imperial Bank of Commerce as well as Microsoft Inc. Cadillac Fairview Corp. and Investment Management Corp. of Ontario are also developing 1.2 million-plus square feet of office and retail space.

In a bid to attract global tech giants or other major tenants, Oxford has plans for 100,000-square-foot spaces that would be split between the office towers and connected by a common atrium, said Mark Cote, head of development. One company would be able to occupy the whole space.

About 18,000 people will work at Union Park, and the development itself could create 22,000 construction jobs, Oxford said. The firm’s application will include an expansion of the PATH network, an underground connection to Toronto’s financial core.

As for the housing portion, Oxford will focus on larger rentals units ranging from one- to three-bedrooms, given the short supply downtown for families.

“It’s an under-serviced part of the market,” Cote said. “300-square-foot units, I mean, it’s hard to raise a family in those apartments.”

Oxford is renewing its portfolio, selling assets such as an office tower in downtown Montreal and a stake in iconic hotels in Western Canada while developing 14 projects in the country.

“We intend on continuing to build within Canada: we’ve seen our capital grow almost 35 per cent over the last five years by $7.5 billion in Canada and a lot of that growth has been in our development pipeline,” Plesman said.