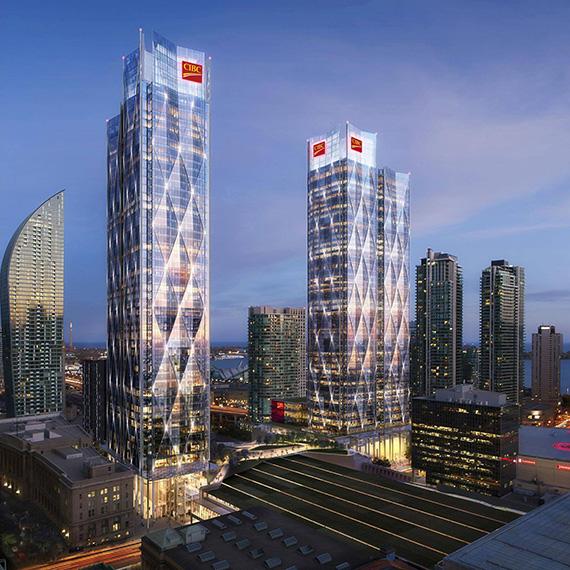 Microsoft Canada announced Tuesday a series of major investments across Canada, including moving its Canadian HQ to a brand new CIBC Square office tower when it opens in 2020 in Downtown Toronto.

Microsoft will occupy 132,000 square feet over four floors at the project, which is currently under construction at 81 Bay Street by developers Ivanhoé Cambridge and Hines. Move-in is scheduled for September 2020.

“We look forward to this long-term relationship and are delighted to welcome Microsoft Canada to CIBC Square.”

The move is one of several major initiatives announced by Microsoft, and several involve its office and other facilities across Canada. Microsoft says it will:

– grow staff by more than 500 full-time employees, with an additional 500 co-ops/internships by 2022;
– invest $21 million in Azure credits to Canada’s Supercluster initiative;
– invest $10 million over five years into Cascadia innovation corridor between Washington and British Columbia to create new economic opportunities;
– invest more than $570 million in the next 3 years in fixed assets in the country. In addition to the new HQ, these include relocation and expansion of its research and development lab in Montreal, relocation of its Vancouver sales office, renovation and redesign of its Ottawa, Calgary and Montreal sales offices.

Canada a “global leader” in tech.

“Increasingly, Canada is being recognized as a global leader in technology and the investments we are making today and into the future will help ensure Canada continues to be a hotbed of innovation,” Microsoft Canada president Kevin Peesker said in the release.

“By relocating our headquarters to CIBC Square in downtown Toronto, we will be able to better serve our customers and attract top talent to continue to drive innovation and growth for our Canadian customers and our large partner ecosystem.”

Microsoft’s Canadian operations provide nationwide sales, marketing, consulting and local support services in both French and English. Currently headquartered in Mississauga in a building which also houses the Microsoft Technology Centre, Microsoft Canada has nine regional offices across the country.

The most significant move will be its head office.

The CIBC Square site, formerly known as the Bay Park Centre, will feature two buildings and a one-acre elevated park at the fourth-floor level, which will span the rail corridor between the two towers. The first building, 81 Bay, is scheduled for completion in 2020. The second building at 141 Bay and the elevated parkwill be completed in 2023.

“CIBC Square will provide its occupants with market-leading amenities, an elevated park, and an iconic design, while being strategically located at the confluence of all major transit channels in the heart of downtown Toronto,” Lloyd said in the release.

CIBC Square will be a 2.9 million-square-foot mixed-use campus. The buildings will feature 49 and 50 storeys of “cutting-edge office and collaborative spaces designed to exceed the expectations of the most discerning tenants,” according to Ivanhoe Cambridge and Hines. Open floor plates and the most up-to-date building systems will enable tenants to optimize the footprint and new technologies.

Finished ceiling heights throughout the project will be 9 1/2 feet on the office floors and 12 feet on the high-density podium floors. Floorplates will be the largest available in downtown Toronto. CIBC Square will seek LEED Platinum Core & Shell certification, WELL Certification and WiredScore Platinum accreditation.

“Having another first-class tenant choosing to relocate its Canadian head office to this transformative project is evidence CIBC SQUARE is the new pre-eminent business address in downtown Toronto,” said Tom D’Arcy, senior managing director at Hines, in the release.