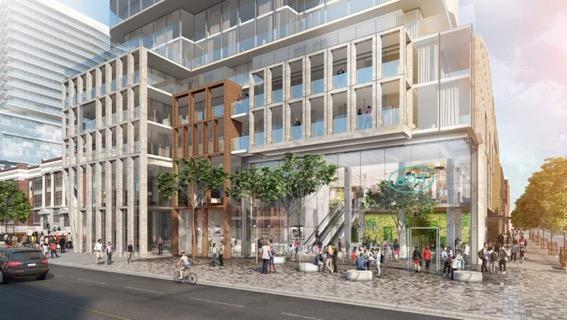 Ever since a Request For Proposals process selected Capital Developments and Metropia to redevelop a 7.3-acre Toronto District School Board property at Bloor and Dufferin, we have been expecting a high-density rebuild of the site. After community feedback following two versions of the plan, the developers have returned, revising the proposed urban form to fall more in line with locals’ requests. The latest iteration brings a 58,000 sq. ft. reduction in gross floor area, a number of changes to the building heights, unit counts, heritage treatment, and public realm design. 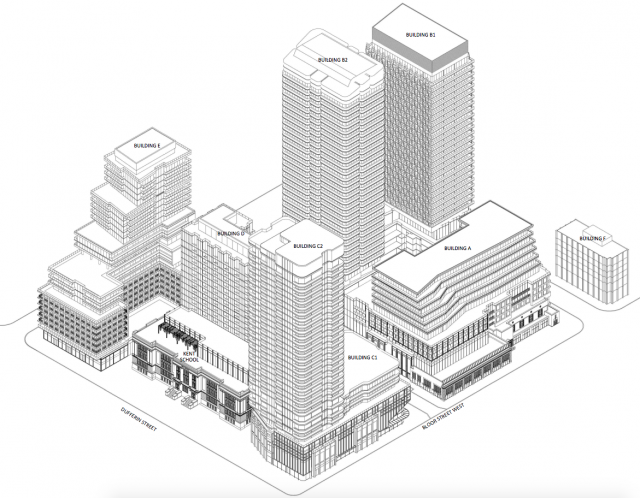 A massing diagram of the entire community from the Bloor-Dufferin intersection, image courtesy of Capital Developments and Metro.

The master planned development is sub-divided into 7 blocks, 6 of which play host to mixed-use buildings, and the remainder dedicated to parkland.

Block A, on the west end of the development fronts Bloor Street. Furthest west is a 6-storey building (Building F) meant to transition to the neighbourhood’s built form, and it has not changed in this revision, but the largest building in Block A is proposed at 11 storeys with two floors of retail and 211 condo units. This building has remained relatively unchanged in terms of height and unit count throughout each revision. Now, however, the Bloor streetscape has been altered to include the façade of the existing Bloor Collegiate Institute and Eaton Factory buildings, maintaining the 2 storey street wall typical of Bloor Street West. A forecourt created by Bloor Collegiate’s setbacks creates ample space for restaurant patios to animate the streetscape. Rising 5 storeys from these façades, the podium will be step back 6.5 metres from the Bloor Collegiate façade and 8 metres from the Eaton Factory façade, and stepping back another 1.3 metres at each of the levels above. 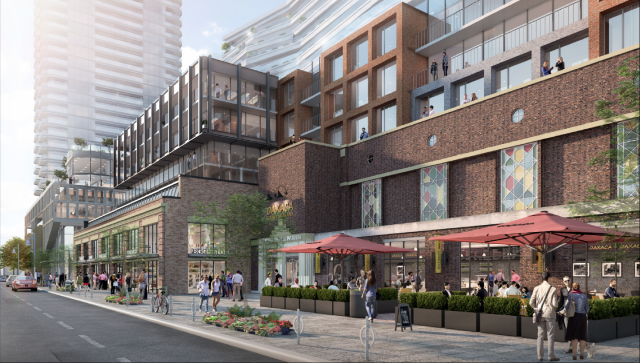 Block B is located to the south of A. It houses the bulk of the development’s residential density, two towers now proposed at 33 and 37 units to house 841 residential units, down by 101 units from the 2018 proposal. At ground level, a retail unit is intended for a brewery and event space fronting on the community’s green space. 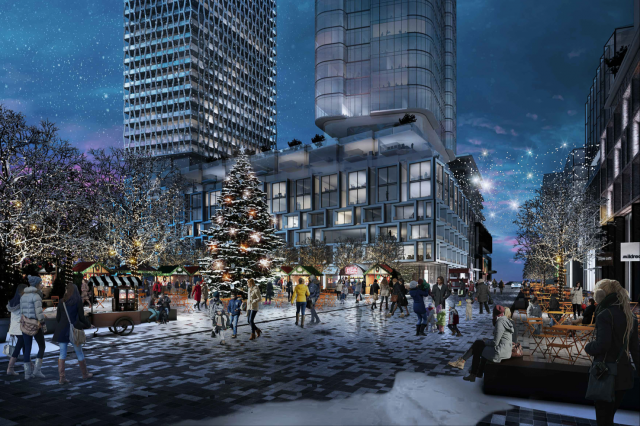 The towers of Block B – public park in the foreground, image courtesy of Capital Developments and Metropia.

Block C, at the corner of Bloor and Dufferin has increased in height by one storey and to a height of 105 metres. The plan now proposes that this building include a direct underground connection to Dufferin Subway Station, which previously only held entrances on the north side of Bloor Street. Escalators will connect the underground TTC concourse with the 1,265 sq. m ground level retail space.

Block D is centred on the restoration of the 1909-built beaux-arts style Kent School. This building will be retrofitted from the inside out to house a community hub, daycare, office and retail space. What’s new in this version is an urban farm and restaurant space on the 4th storey roof of the heritage structure. The condominium portion, attached to the west façade of the building, now rises 17 storeys, one level  taller than the previous plan. 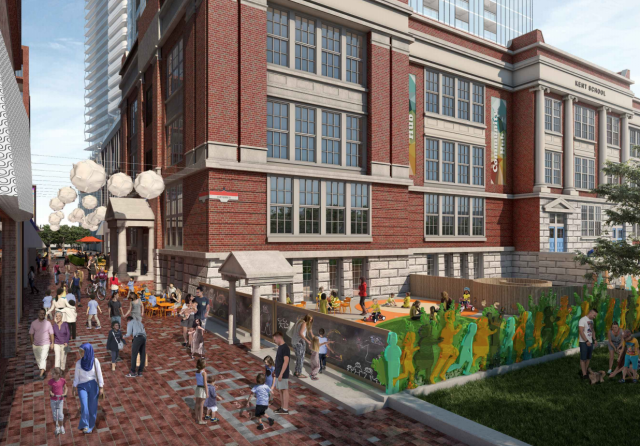 Block E has been revised down to a 22-storey height with an increased unit count. The building steps back at the 7th, 9th, 10th, and 13th storey levels. The ground floor here features a large retail space, reaching nearly 20,000 sq ft., along with a number of micro-retail spaces for a more fine-grained experience along the adjacent pedestrian lane. The table below illustrates the density changes to the development over time.