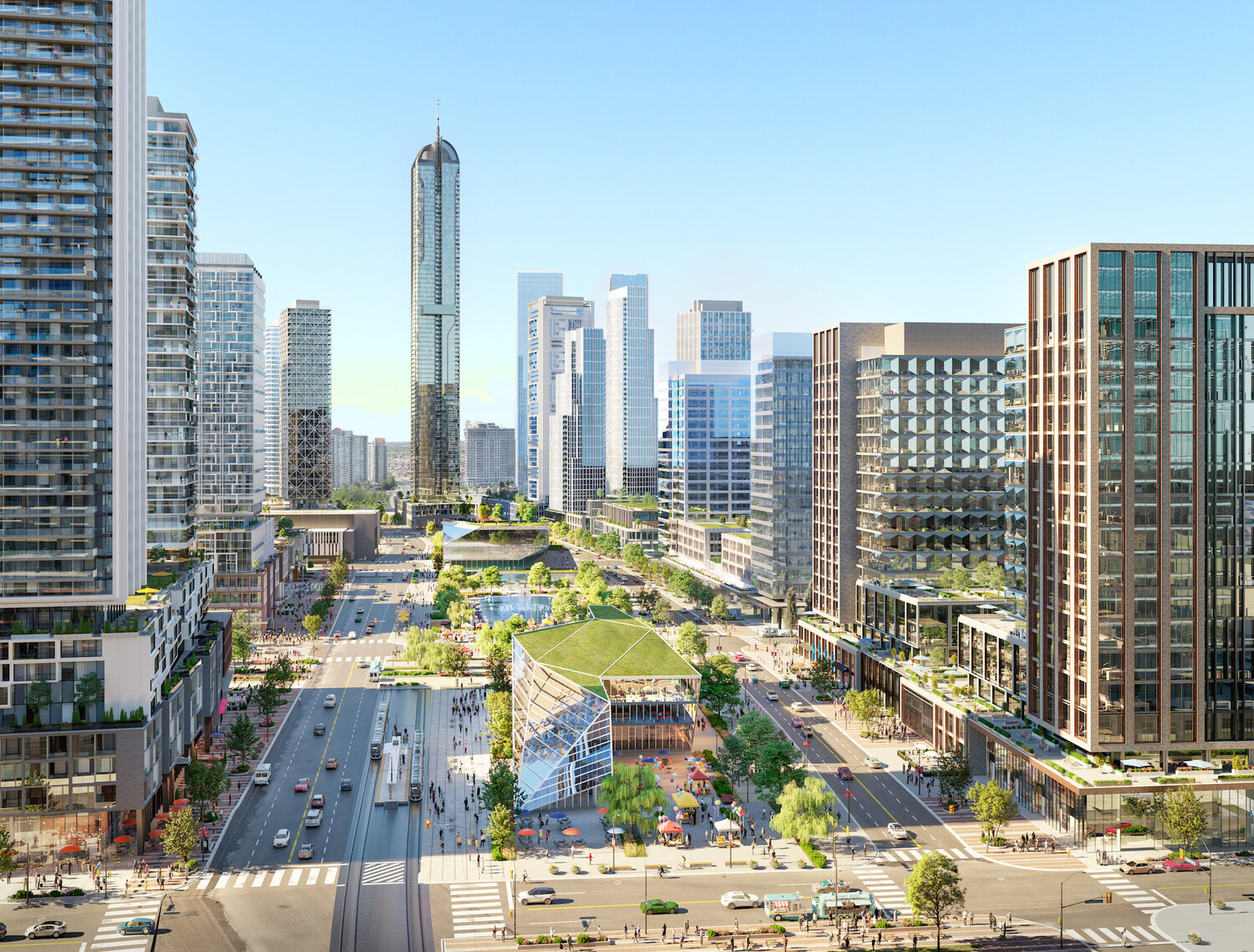 Mississauga is finally getting its downtown! Spirits were high Tuesday morning inside the recently-built Holt Renfrew wing of the Square One Shopping Centre in the Mississauga City Centre area. An LED screen with the letters ‘We’re Thinking Big’ sat behind the stage, emblematic of both the energy in the room and attendees’ expectations. Anticipated for many years, the mall’s owner Oxford Properties, along with Alberta pension fund AIMCo called a press conference to announce The Square One District, a multi-decade project that will develop the sea of parking and open lots surrounding the 1972-built mall. The developer, who has recently built Toronto’s EY Tower, New York’s Hudson Yards, and has plans for a $3.5 billion mixed-use complex adjacent to Toronto’s Rogers Centre, is going all-in on Downtown Mississauga with a 37-tower mixed-use development set to define the area for decades to come.

It’s hard to believe, but only 4 years after the plan originally surfaced, East Harbour’s status as Canada’s largest proposed development has already been overtaken. With a record previously set at 12 million ft² by the aforementioned project, The Square One District will see 18 million ft² of space built on 130 acres of currently under-utilized land. For scale, this project is akin to building The Well six times over. A true mixed-use centre, the project will house the first new office buildings to be constructed in Mississauga’s City Centre in ‘a generation’, 18,000 residential units, and thousands of square feet of new retail and entertainment spaces; all anchored by the existing Square One complex.

Bound by Highway 403 to the north, Burnhamthorpe Road to the south, Confederation Parkway to the west and City Centre Drive to the east, the project is master-planned by Hariri Pontarini Architects, a firm that’s no stranger to this kind of work; currently working on similar projects like the Galleria Mall Redevelopment and the Choice REIT project at Dundas West Station. 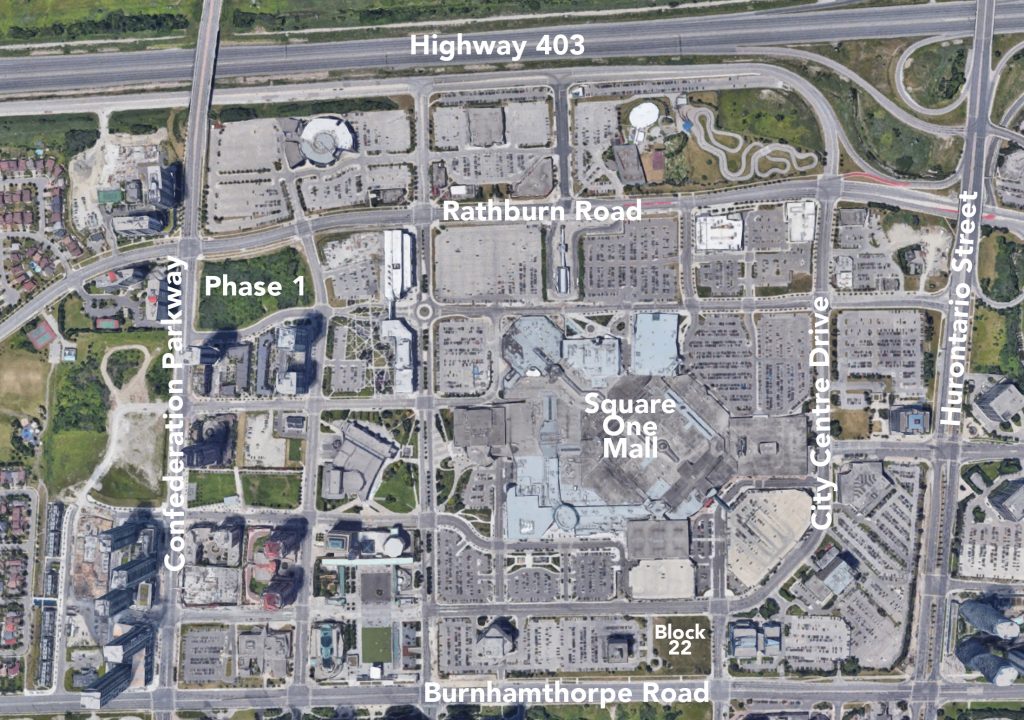 At the centre of The Square One District is a space called ‘The Strand’, located along Rathburn Road just west of Hurontario Street, the strand is envisioned as the anchor of pedestrian activity within the city. The space would feature street level retail, walkable parks, public art, and a transit hub that would connect to the future Hurontario LRT and local MiWay bus service. The LRT itself is set to begin construction this year, with Prabmeet Sarkaria, Associate Minister of Small Business and Red Tape Reduction, name dropping the infrastructure project as a primary reason for why the development is happening now. 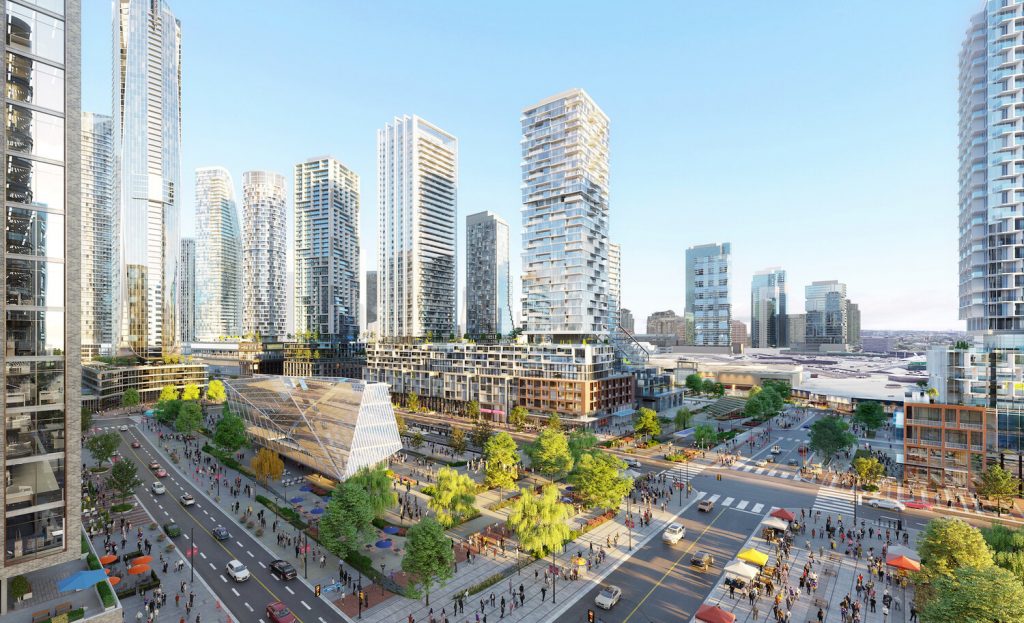 The most unexpected element of the announcement was its immediacy. Often with these large scale projects (especially in a Toronto context), renderings and site plans are available years before they have made it through the planning process. In this case, Oxford has already received approval for phase one of the project, a pair of IBI Architects-designed residential towers anchoring the northwest corner of the Square One District at the southeast corner of Rathburn Road and Confederation Parkway. Being brought to market in partnership with The Daniels Corporation, the towers will rise 36 and 48-storeys, rising from a shared podium. Known as The Condominiums and Rental Residences at Square One District, the buildings will house a collective 977 units; with 575 condominiums located in the 48-storey tower and 402 purpose-built rentals located in the 36-storey building. The building would feature 8,400 ft² of ancillary retail at grade. Speaking further to the immediacy, this specific pair of towers will begin sales as early as April 2020, and will break ground for construction this Summer. Tentative occupancy for the first phase is set for 2024. 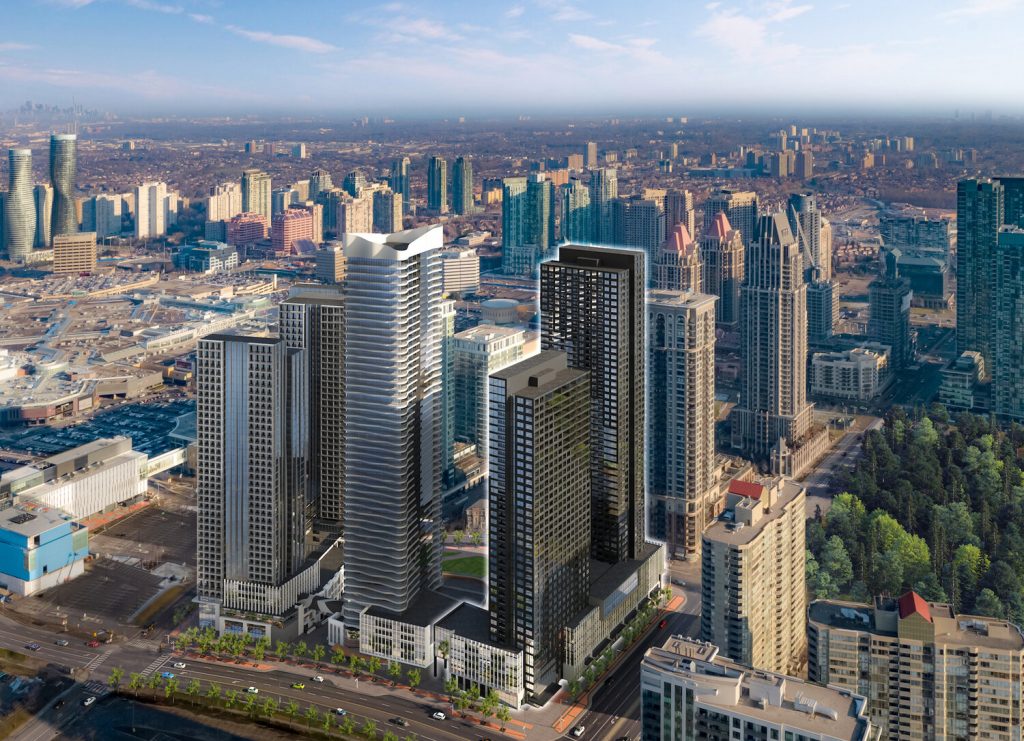 Speaking with Niall Haggart, Executive Vice President of The Daniels Corporation, he referenced a set of exclusive amenities that would link the residents to the Square One Shopping Complex itself, in a similar vein to the way residents of Festival Tower received exclusive access to the TIFF Bell Lightbox.

5,000 additional residential units are scheduled to launch in the next five to seven years. Notably, the entire district will see over half of its residential units configured with a purpose-built rental tenure, hoping to ease the extremely tight 1.5% rental vacancy rate.

Also increasingly immediate is the marketing of the project’s first office tower to prospective tenants, a process which is set to begin as soon as Q2 2020.