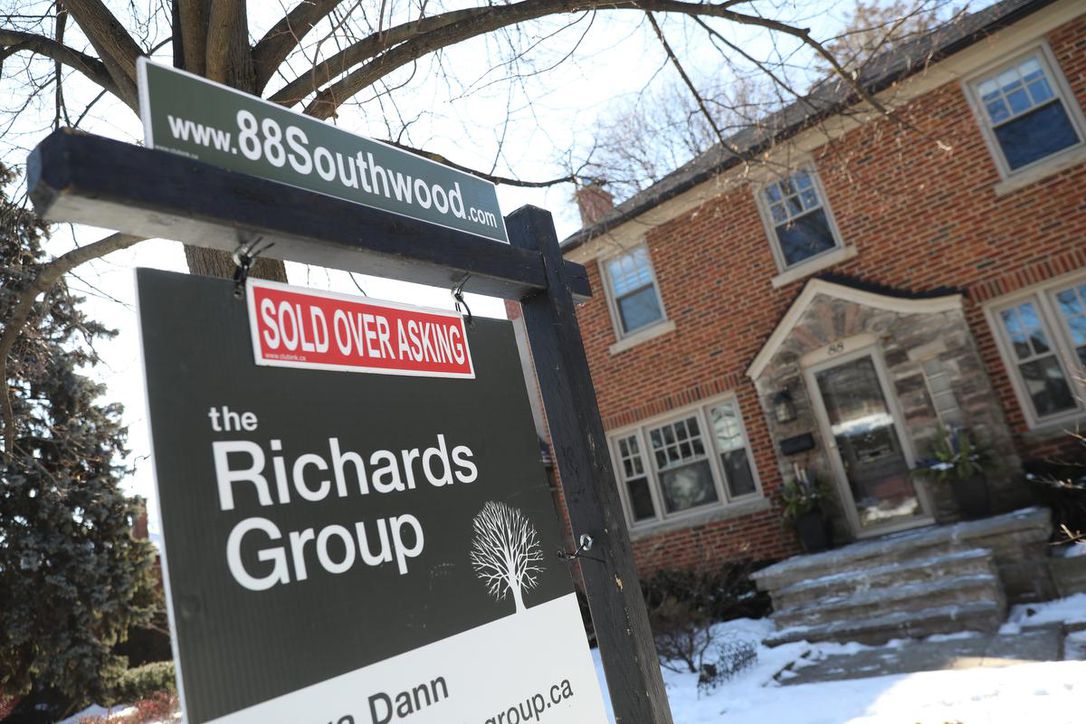 The Toronto Regional Real Estate Board expects the average price of a resale home in the Toronto area to climb about 10 per cent this year, surpassing the $1-million mark for the first time.

That would bring the average home price across all housing categories, including condos, to about $1.025 million in 2021.

Real estate board officials said on Monday that the forecast is based on a strong sales and prices at the start of the year, record low interest rates and the prospect of economic recovery in white-collar employment.

With immigration expected to increase as the year goes on, newcomers will add further demand on the housing supply, said TRREB chief market analyst Jason Mercer.

“Just looking at the momentum we had based on a strong recovery in many sectors of the economy, especially those with above-average earnings that cater to housing demand, it makes sense the demand for housing generally will remain strong as we move through this year. On top of that you’ll also see a resurgence in the condominium apartment segment as well,” Mercer told reporters following a web presentation.

If December and January sales levels continue through the year, that supports the board’s forecast of 105,000 sales this year, he said: “We’re expecting to see listings creep up a little bit but not on the same track as sales are. We’ll see 160,000 listings in 2021.”

A soaring detached house market, especially in the 905 areas outside the city, set the traditionally quiet winter real estate market ablaze. Outside Toronto, GTA detached house prices soared 36.6 per cent to about $1.3 million on average. Inside Toronto’s city borders prices climbed a more modest 16 per cent to an average of nearly $1.6 million.

Condo sales also showed signs of recovery after a sluggish summer and early fall, with an 85.5 per cent year-over-year increase in transactions. Although Toronto prices declined about eight per cent to $624,886 in January compared to the same month last year, average condo prices in the 905 areas rose five per cent to $547,488.

Realosophy brokerage president John Pasalis told the Star he thinks only a huge number of white-collar job losses would hold down sales and prices, and that isn’t expected. Still, he said the trend is “worrying.”

Although he seldom uses the term, “It certainly is a ‘bubble,’” Pasalis said, adding he disagrees with the real estate board, Canada Mortgage and Housing Corp. and the Bank of Canada about that. “It’s a major red flag and every month that passes things are getting worse.”

Royal LePage CEO Phil Soper said that the possibility of a serious market correction — a crash — is extremely limited given the sunny outlook for the overall economy.

There may be vulnerable pockets of the market, particularly if there are annualized price increases in the range of 20 per cent, but the pandemic’s drag on the economy will likely prevent that, he said.

“There may be some capacity in Durham and York to absorb some uncomfortably high home price increases without serious consequences in terms of a harsh correction. But we will have a correction if that continues,” said Soper.

TRREB’s data shows that there will be a material gap between the condo sector and the detached home market this year. Soper expects condo prices and rents will remain flat this year: “There’s still more people interested in selling than buying among investors in the condo sector.”

Ipsos research for the Toronto Regional Real Estate Board showed COVID-19 acted as an accelerant for home buyers — drawing them into the market sooner than expected and influencing where they bought.

Here are some of the key findings presented by Ipsos vice-president Sean Simpson on Monday.