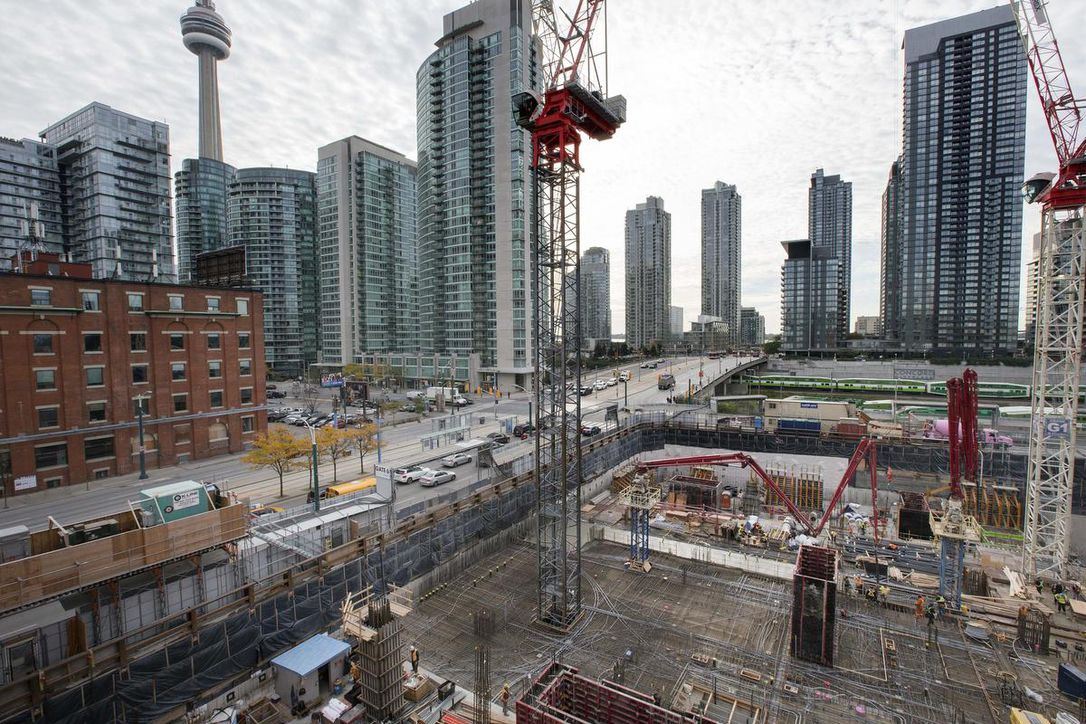 In the real estate obsessed Toronto region, 2018 was the year of the condo — again. Condo prices have been rising for the past three years.

The conditions that made it tougher to buy a house this year — tighter mortgage qualification rules, higher interest rates — contributed to strong demand for condos, which have emerged as the default first home choice and the obvious housing for the workforce that has flocked into downtown Toronto and some of the 905-area municipalities.

New construction condo prices (the category also includes stacked town homes) were up 12 per cent year over year in November to $768,602. Resale condos averaged $595,678, up 7.5 per cent during the same period, according to the Building and Land Development Association and the Toronto Real Estate Board.

There are signs, however, that the condo market will moderate in 2019, say analysts and developers.

“We’re entering right now, the beginning of what will be a record run of condo completions so that’s going to help slow down price growth and rents,” said Shaun Hildebrand, senior vice-president of market research company Urbanation.

He predicts prices will climb above 5 per cent in the first half of the year but fall below that as supply comes online and interest rates build.

But a more balanced market is a good thing for would-be buyers, says reluctant forecaster Andrew Harrild of specialty realtor Condos.ca. He says he is hoping for 5 per cent to 8 per cent growth next year.

“It could be a balanced market and one that works for buyers, not just for sellers,” he said.

Sales of higher priced units had been slowing toward the end of 2018, said Harrild. A condo in the Mozo building at Adelaide St., east of Yonge St., that was recently listed for $1 million, drew no buyers on offer night, even though a renovated unit on a higher floor had earlier sold for $1.3 million.

It’s possible that unit got caught in the seasonal malaise, he said, adding he doesn’t expect to have a more precise measure of 2019 before February and March.

Condos in the entry-level price range under $800,000 remain hot sellers in the city of Toronto, he said. So do character buildings. Harrild cites the Wonder condos at the old Weston bakery site at Eastern and Logan Aves.

In addition to being unique, “people saw the potential there,” he said, citing its proximity to the Unilever lands east of the Don River that will include new transit stations, 6 million sq. ft. of office space and 2 million sq. ft. of retail, the equivalent of the Yorkdale Mall.

“That project had a really good story to sell, coupled with it being a really cool boutique lofty building with a lot of character, a lot of history. I think people fell for that. I think that’s a good way to hedge against a future correction,” he said.

Harrild is a fan of lofts that aren’t cookie cutter. “Long-term, that makes for a better investment,” he said.

The injection of newly completed condos, which account for about a third of Toronto’s rentals, should also help stem climbing rents, which have been rising at unsustainable levels, said Hildebrand.

The flip side of that is that it will be difficult for condo investors paying $1,000 per sq. ft. to see the returns they are looking for when new units come up for completion in a few years. But that’s a longer term problem that won’t emerge until about 2021 or 2022, said Hildebrand.

Higher construction costs are also putting pressure on presales, according to developers.

“We’ve seen cost inflation in the construction space being in the range of 10 per cent this past year, which is something we hadn’t seen previously,” said Shamez Virani, president of Centrecourt Inc. “The theme of 2019 is about protecting your market, about ensuring that you’re really being thoughtful about the timing and the allocation of costs and selling and building in the same market environment so you don’t get caught in that situation where you’re forced to cancel a project.”

Urbanation counted 15 projects with more than 4,500 units cancelled this year, compared to 1,678 cancelled units last year and only 379 in 2016. Among the cancellations were the multi-tower Cosmos and Icona developments in Vaughan.

Tarion, Ontario’s builder warranty agent, has warned that more cancellations could be in the offing this year.

The high cost of downtown condos is pushing some consumers to search further afield to purchase in transit-serviced areas such as Scarborough and Etobicoke, said David Amborski, a professor at Ryerson University’s School of Urban and Regional Planning.

Downtown, the vertical growth is stretching the city’s servicing capacity and will impact the provision of soft services such as health care, schools, recreation centres and parkland, he said, citing the City of Toronto’s pursuit of a rail deck park downtown.

“If you have density in development are you going to have backup times in (health facility) waiting rooms? Those things on the social side need to be addressed,” he said.

If there is more supply in the short-term as buildings come to completion, Amborski believes the city’s job growth will ensure a shortage in the long term. But that healthy employment and the strong economy behind it also support the market, he said.

Hildebrand agrees. In the last two-and-a-half years, 200,000 people have moved into the region, and there have been about 150,000 jobs created.

“There’s a lot of pent-up demand that is certainly accumulating,” he said.

After years of pushing for more family-friendly condos, industry observers note a shortage has emerged in studio condos, the most affordable units. The cost of a studio increased 16.8 per cent year over year in the third quarter, compared to about 10 per cent for a one-bedroom, 7.5 per cent for a two-bedroom and 3.3 per cent for a three-bedroom apartment.

Owning costs about $400 a month more than renting a 700 sq. ft. unit but, as quickly as rents have risen in Toronto, home ownership has moved faster in part because of higher interest rates, said Hildebrand.

“Because that gap (between renting and owning) has emerged, it does show there’s more room for rents to grow,” he said, referring to the longer time people will spend renting before they buy.

For the first time in a decade, the share of condos being used as rental properties actually fell in Toronto” in 2018, said Hildebrand. “That was extremely troubling,” given that rental demand is at the highest level in 30 years, he said.

“I was actually surprised,” he said, “to see that the vacancy rate didn’t drop lower than 0.7 per cent. I thought that we would be basically zero.”