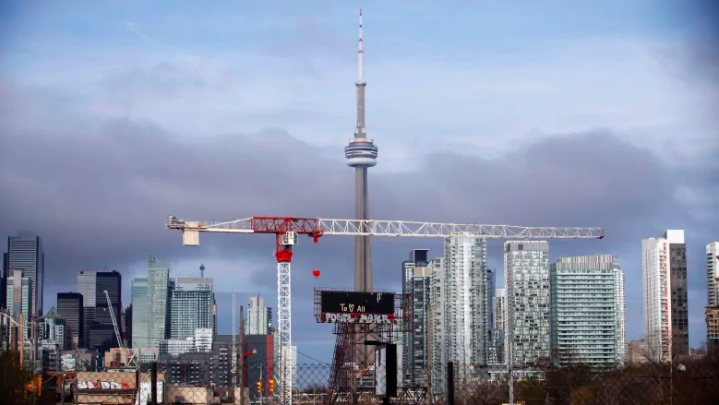 Bylaws were held up for nearly 2 years after lengthly appeals process. Short-term rentals were technically not permitted in Toronto while the proposed regulations were being appealed. But the rules were not implemented due to multiple appeals made to the province’s Local Planning and Appeal Tribunal.

A provincial tribunal has ruled in favour of Toronto’s plan to put stricter regulations on the city’s short-term rental market.

The Local Planning and Appeal Tribunal (LPAT) made its decision Monday, nearly two years after the city first approved the bylaws.

Under the rules, Toronto will require short-term rental operators to live at the home they list on sites such as Airbnb.

Operators will also be allowed to rent a maximum of three bedrooms in their home or their entire property. They will be required to register with the city to rent out space in their homes.

In his ruling, adjudicator Scott Tousaw described the regulations as “good planning in the public interest.”

“This is good news for Toronto residents and a step in the right direction when it comes to regulating short-term rentals and keeping our neighbourhoods liveable,” said Toronto Mayor John Tory Monday in a written statement.

The regulations are essentially designed to increase the availability of long-term rentals by decreasing the number of homes eligible to be listed on sites like Airbnb and VRBO.

However, the rules were not implemented due to multiple appeals made to the LPAT, formerly known as the Ontario Municipal Board. The appeals were launched by several short-term rental operators seeking to challenge the city’s bylaws.

The LPAT ruling means the city can now move ahead with the regulations.

Ana Bailão, Toronto’s deputy mayor and housing advocate, said the ruling strikes a fair balance that will benefit both tenants and homeowners looking to leverage their properties. 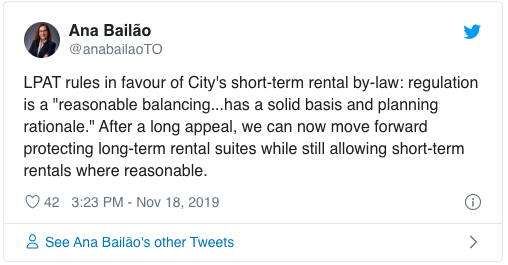 Airbnb and other companies operating in the short-term rental market will now be required to pay a one-time license fee of $5,000, plus $1 for each night booked through their platform.

Rental operators will also be charged with a four-per-cent municipal accommodation tax on all rentals that last less than 28 consecutive days.

Thorben Wieditz of Fairbnb, a coalition that represents the hotel industry, along with property owners and tenants, called the decision a “major victory for tenants across Ontario.”

The LPAT decision notes that some 5,000 units could return to the long-term rental market with the new regulations, though that number may also be somewhat lower, depending on how operators respond to the changes.

“Whatever the number, one fact is indisputable: each dedicated [short-term rental] unit displaces one permanent household. That household must find another place to live,” Tousaw wrote.

“This phenomenon is occurring in increasing numbers in Toronto’s residential areas, the very places that are planned, designed and built to provide housing for residents.”