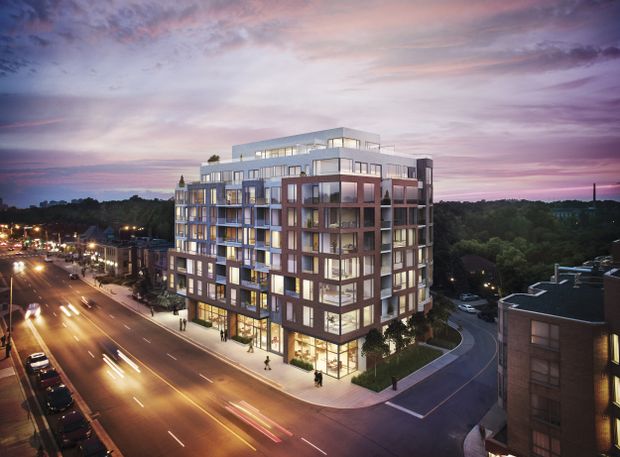 Toronto Wants Mid-Rise Housing, But Can We Afford It?

Toronto Wants Mid-Rise Housing, But Can We Afford It?

Builders in Toronto are facing something of a dilemma: Residents want fewer high-rises and planners are making available more sites suitable for more compact buildings, but costs are making mid-rise residential properties exceptionally expensive to construct.

“My colleagues, we like mid-rise work,” said architect Richard Witt, executive principal at Toronto’s Quadrangle. “It’s interesting; it’s less formulaic, so you often get more interesting building. But the economics of it don’t work for anybody. Almost every client that’s done them has never done another one.”

High-rise condos are now the dominant form of new density in Toronto. According to the “Bedrooms in the Sky” study last year from Urbanation Inc. and the Ryerson City Building Institute, in the 1990s, 56 per cent of condos completed in the central city were under 12 storeys; now, mid-rise projects make up only 7 per cent of units “in the pipeline.” At the time of the study, a whopping 167 projects higher than 12 storeys were in development in the city of Toronto, accounting for about 61,000 units, and 73 per cent of all new condos are in buildings higher than 20 storeys.

Since 2010, the city’s planners have been pushing a return to the modest, middle-type of tall buildings, which generally spans between four and 11 storeys.

“Over the last five years ,we’ve seen more 347 midrise projects; some are built, some aren’t approved yet,” said Lorna Day, Toronto’s director of urban design in city planning. “To me, that’s quite an impressive number; it represents 32,000 units, which is a lot in terms of growth in the city.”

The goal behind the push was to get the development community to help add “gentle density” to some of city’s marquee avenues. “That means the retail has more vitality, the community centres have more users, schools have more population,” Ms. Day said. “At the time, success would have been anything, because there was very little uptake on the avenues when we first started on these [mid-rise performance standards]. “

The guidelines create a sort of envelope with angular plans at the front and back that buildings have to fit in: On the street side, they must not block sunlight on the opposite side of the avenue; on the rear side, they must not overshadow the low-rise single-family dwellings that typically bump up against the city’s busiest commercial strips.

Ms. Day said that in the beginning, the city believed these mid-rise avenue projects would also add more affordable units to expensive midtown neighbourhoods such as those along St. Clair Avenue, which is zoned for eight-storey mid-rise buildings. But that has not been the result. According to developers, they often price these new condos higher than other housing types in the neighbourhood. “These projects don’t end up being what I would characterize as luxury, but do end up being for end-users and are not ‘affordable’ products,” Quadrangle’s Mr. Witt said.