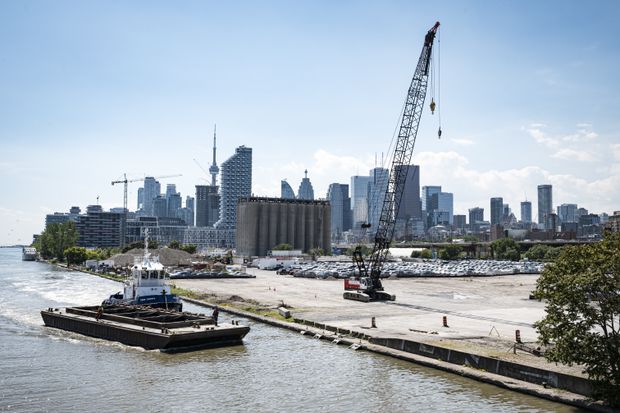 The Canadian Encyclopedia notes that Toronto’s economy has gone through many phases over the city’s history: “commercial lake port, railway and industrial hub, financial nexus and high-level service and information centre.”

Each phase has changed the shape of the city. Wharves sprang up along the harbourfront to handle shipping traffic, sprawling rail yards to handle the trains. Factories and warehouses rose for the booming furniture and textile industries. Decades later, when those industries had moved on, advertising, marketing and design firms made the factories and warehouses into brick-and-beam office space. Banking towers such as Mies van der Rohe’s Toronto-Dominion Centre gave the city its modern skyline.

Now, it is the tech industry that is transforming Toronto. The city is in the midst of a spectacular tech boom. Big firms such as Microsoft, Twitter, Uber, Google and Netflix are setting up shop or expanding here. Thousands of workers are coming to live and work in the city. Thousands of startup companies are revving their engines.

The pell-mell growth of the city comes in part from the rise of tech. Patrick Fejér of B+H Architects says 10 million square feet of new office space is due to open by 2024, more than was built from 1992 to the present. Toronto, he says, has more than 120 construction cranes in the air, compared with 65 in Seattle and 35 in New York.

CBRE, a real estate consultancy, says that Toronto is the fastest-growing market for tech talent in North America, “adding an eye-popping 80,100 tech jobs in the past five years, a 54-per-cent increase.” It now ranks third, just behind San Francisco’s Bay Area and Seattle.

Another report this year, from BMO Capital Markets, said that Toronto already has 241,000 tech-industry jobs. With a healthy venture-capital scene and links to the tech hub in Kitchener-Waterloo, it is well positioned to gain many more.

All of this is great for the city. The tech boom accounts for much of its amazing dynamism. It is remaking whole swaths of the city. The forest of tall buildings shooting up in the old King-Spadina warehouse district will provide housing and work space for throngs of tech workers. Another tech hub seems destined to grow in the Port Lands at the east end of Toronto harbour. Google is proposing to build a new Canadian headquarters there and its offspring, Sidewalk Labs, is creating a living laboratory for urban innovations nearby.

It is especially great for downtown. The tech boom is one of the factors in reversing the outflow of office jobs to the suburbs and exurbs. Mr. Fejér, the architect, says that most tech workers wouldn’t dream of settling north of Bloor Street, much less in Mississauga. For them, St. Clair Avenue is the furthest edge of civilization.

To attract and keep these workers, companies must find space downtown – and nice space at that. Many of the creative new buildings coming up in the core are designed with tech workers in mind. No rows of cubicles for them. They want showers and patios and open spaces for collaborative work.

Can the tech boom last? Toronto has lots of natural advantages: a big pool of immigrants, a host of eager university students, a solid banking sector.

Ottawa’s moves to attract skilled immigrants and speed their entry makes Canada look good at a time when its neighbour next door seems to be closing the door. The city’s energy and diversity, so visible after the Raptors’ big win, are magnetic.

But Toronto has shortcomings, too.

Housing is expensive. The mass transit system, though far better than those in many American cities, is underbuilt, underfunded and showing the strain. The downtown, for all its vigour, lacks for public space and big-draw attractions.

The good news is that all the jobs and money pouring into the city from the tech boom will help it address these weaknesses. To keep pulling in tech talent, Toronto will have to raise its game and become an even better place to live. It will have to transform itself once again.