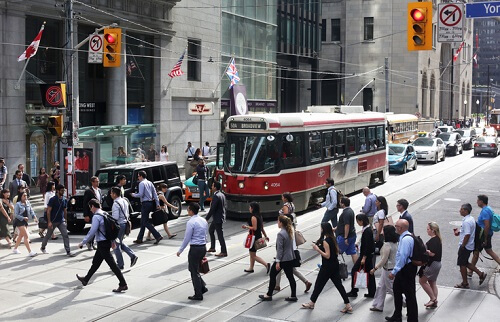 It’s no secret that investing in property near transit will yield promising ROIs, but according to the Real Estate Intelligence Network, there are precise calculations investors can make to optimize rental prices.

“Transportation infrastructure delivers 10-20% of the value within 800 metres of access to rail or highway,” said Jennifer Hunt, REIN’s vice president of research and events, and co-author of the Toronto Transportation Effect Report. “Multifamily properties are between 27% and 99% more valuable when they’re within 1,600 metres than those beyond. The greatest premium is within 400 metres.

The commercial sector, too, greatly benefits from nearby transit. According to the report, offices within 500 metres of rapid transit stations have 34% fewer vacancies and value enhancement of up to 28%.

Another key consideration for real estate investors is timing a property purchase if it’s near a transit infrastructure project. There are four tiers of which to be cognizant, according to REIN: The first is when the project is under construction; the second tier means construction hasn’t begun, but the project has been funded; the third tier is for planned, but unfunded, projects; and the fourth refers to projects in their most inchoate phase, meaning they’re far from finalized.

Hunt noted that each tier will affect valuations differently.

“As soon as a project is announced, there’s an immediate boost to values of 20%,” she said. “The construction phase makes values fall because of the traffic and noise created by the construction. Values fall a bit again post-construction when the project is operational. Some studies show it takes a year or two for the full impact to come into play. Humans are humans and we need time to adjust.”

Given the delicacy with which investments near transit projects need to be treated, Hunt emphasizes mindfulness about the political landscape.

“Because the project could get stalled, depending on who’s in office.”

The report uses Ottawa’s LRT project as a case study. The east-west Confederation Line was supposed to open in late 2018, but only by this past January was it in the final stages of construction, testing and certification. As a result, real estate prices increased roughly 39% since the announcement was made, compared to the city’s overall gain of 37% between 2008 and 2017.

“There was a spike in prices when the announcement came the LRT would move forward, based on the anticipated benefits the LRT would bring,” read the report. “However, the lengthy construction phase with its noise, inconvenience and air pollutants dampened the enthusiasm for living in the area and prices dropped and/or stagnated. Based on research and experience, over the next two years (by the end of 2021) we can watch this area and expect to see values increase roughly 10% over other areas of Ottawa without access to the LRT.”